Back in 2015 I'd taken the decision to sell my 15mm Napoleonic French figures and replace them with figures that I felt happier with owning and seeing on the table. Well this has been a very long process which has stagnated during the few years. My previous post invigorated me to conduct an appraisal of my Napoleonic French figures. In keeping with my gentle introduction back into painting figures I decided to focus on the command stands. Checking the number I'd to need for my envisage French Line Infantry Corps. I found there were only a few that required the basing finishing, with a few others to be based along with labelling them all.

Across all my Napoleonic Armies I'm following a figure basing regime of; 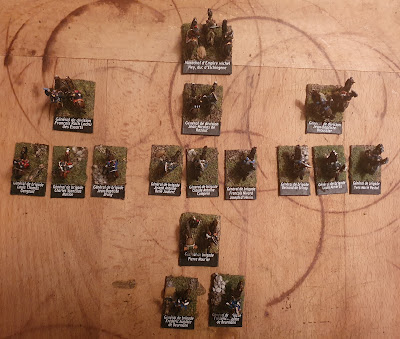 Older Post Home
Subscribe to: Post Comments (Atom)
I have been wargaming for 10 years in which time I have finally settled on two eras, Napoleonic and WWII, both in 15mm (1:100). Most of my ramblings will be about gaming in these two eras. An attempt will be made to record my wargaming interests, building of armies, ideas, interests and hopefully some games played.